500 people from around the world gathered to attend the 4th Annual Bulletproof Biohacking Conference in Pasadena, a sunny corner of LA. Just walking around the city, it was clear that the Bulletproof® tribe was in town. Groups of attendees would hang out near the conference center without shirts on to soak up the sun before heading back inside and putting their blue blockers on to deal with the artificial light.

At night, you could see hotel room windows that were significantly darker than the rest, which were likely from biohackers blacking out their rooms for sleeping. Inside the conference center, about 10% of people were wearing blue-light blocking glasses to shield their eyes from the artificial lighting. Studies have shown artificial light to significantlydecrease the lifespan of mice (with many different lighting environments tested). So we weren’t too surprised to see people wearing their blue-blockers during the day. 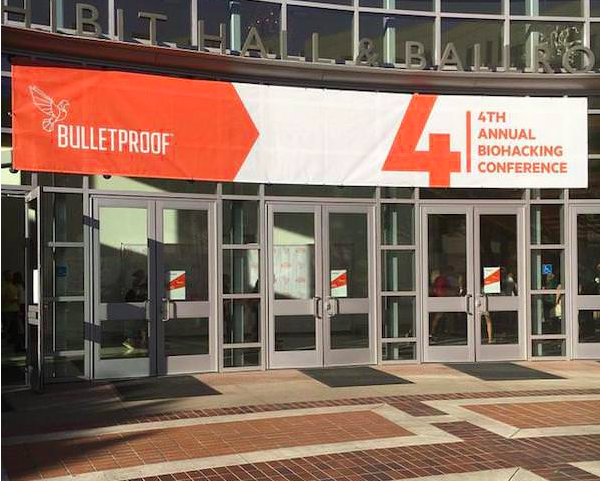 It was a three-day event with many of the world’s top speakers in the fields of biohacking and human performance like Mark Sisson, Kelly Starrett, Jim Kwik, John Gray and of course, Dave Asprey (unfortunately, Wim Hof couldn’t make it this year!). The main themes were light hacking and stem cells. All the lectures are in fact available online. Mind-expanding talks aside, we were also treated to a huge exhibit hall full of cutting-edge biohacking technology to play with. In between the excitement of brain hacking in the tech hall and taking notes in the speaker rooms, there was more Bulletproof Coffee being served than you could ever drink! They even made ghee variations along with collagen protein. I think the official count for the weekend was over 13,000 cups.